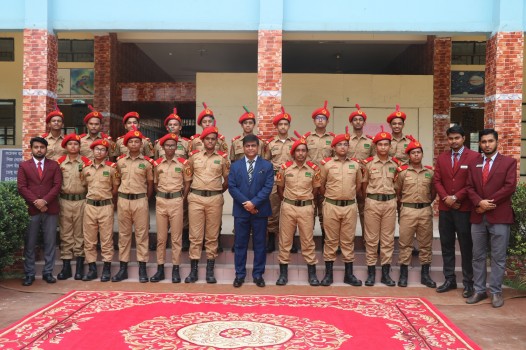 Bangladesh National Cadet Core (BNCC) was established with the guiding principles of knowledge, discipline and unity to provide military training side by side to young generation especially the students of schools, colleges and universities and to make them as second line defense force along with developing moral character.

There is a long history of Bangladesh National Cadet Core (BNCC). After passing Indian Territorial Force (IMF) Act in 1923 by the recommendation of Auxiliary Territorial Force, the University Training Force (UTC) was created in Dhaka. In 1943, it was renamed as University Officers’ Training (UOTC). The Junior Division Cadets (JDC) was created for the girls of schools and colleges in 1966. During the Liberation War of 1971, these core’s members actively participated in the war. In 23 March 1979, by the government order (Order no. 48/7/D-1/76/212), UTC and JDC were merged as Bangladesh National Cadet Core(BNCC).

The objectives of BNCC are: (a) to improve the morality of young generation; to build up the leadership quality, sacrificing attitude and above all, to build up brotherhood among students; (b) to give encouragement, enthusiasm among students for the defense of the country by military training; (c) to work as disciplined voluntary battalion for national development work and also in disaster (d) to create secondary resistance battalion for external attack. (e) to create as a backup for good leadership. Now BNCC’s work sphere has increased a lot. The acceptability of BNCC has reached a spiteful levelby some beneficial work to the people such as blood donation, removal of illiteracy, cleaning campaign, traffic control, help security force in different governmental functions, tree plantation etc. A BNCC cadet can fight for justice above self-interest, inferiority complex, political stumble and so on. BNCC’s importance and usefulness have been increased hugely not only in Bangladesh but also in international arena.

In 2019, respected Principal Brigadier General (Retd) Mirza Ezazur Rahman, BGBM, ndc, psc, G+,MPhil, MSc, MDS, took an initiative to open BNCC platoon at Baridhara Scholars’ International School and College. By the guidance and assertive involvement of the beloved Principal, BNCC headquarter permitted to open a BNCC junior platoon at BSISC in January 2019. A BNCC platoon under Ramna Regiment was formed. Later BNCC authority recruited a military instructor to train the cadets and the activities started with 28 junior cadets. After the establishment of BNCC, the cadets are helping in various functions as Annual Sports, Annual Cultural Programme, Martyr and International Mother Language Day, Independence Day, and other important programs at the institution dexterously. A team of three teachers, Abul Basar, Mohammad Mamun Bhuiyan and Md. Mustakim Rayhan, are managing the platoon.